Five years ago I lost my best friend and the man I thought I’d spend the rest of my life with. My journey through grief has been a rocky one, especially in the beginning, as I didn’t know anyone experiencing similar heartache and little is published on the subject. I had no one to learn from — no guideline other than the one I’d been brought up on and, while its central message ultimately kept me hopeful, there was no escaping the weight of losing the man I intended to spend the rest of my life with. And, in the beginning, there was no hiding it.

A common portrayal — at least in movies and television — of those who have seen combat is that they don’t resonate with those who have never been on the front lines. The same holds true for those who’ve lost loved ones before their time. Unless you have been there, it’s a difficult experience to convey. As I adjusted from one city to the next after the crash, I juggled both jobs and grief around those who struggled to find the right words to say to me and the things people have said stuck with me.

Many wittingly or unwittingly said hurtful things, like being ridiculed by a co-worker for dating a missionary pilot; being told by another friend “You can’t exactly put a time on these things, but it’s been a long time;” a boss who, in a staff meeting, marveled at news of a pilot that survived a hardware malfunction at Mach speeds. The list goes on.

The most cutting remark came from a total stranger. An acquaintance taking me to visit her church in downtown D.C., prompted by a Taylor Swift song then-playing on her car radio, asked whether I’d ever been heartbroken. “No … well, yes,” I said, not knowing how to answer her pointed question. Her response? “It builds character. Doesn’t it?”

While some cut deeply with their words, others, drew me closer, securing my gratitude with their gentle observations and thoughts. In all the unanswered questions and the ever-present void created by Josh’s absence, one of the most assuring comments came from my mom during an observation she made after reading through the letters Josh and I exchanged — letters his parents returned to me and that I was too weak to hide from mom when she asked to see them.

What did she, while sitting at the foot of my bed as I lay sobbing, say to me after reading the letters? She said some people go a lifetime without experiencing such love. Part of me disliked the invasion of privacy but another part of me was relieved for her to understand what I was going through without having to say as much.

What blessings could arise out of such sorrow? This question I asked myself after my older sister brought up the story of a woman who, at age 17, was paralyzed from the neck down but counted her injury a gift.

“A gift?” I thought to myself. “How could this woman possibly consider her disability a gift?” And how could I consider in the same light my own shattered dreams? “No,” I thought. “The crash is tragic and always will be — a byproduct of life in a fallen world.”

The joyful memories, however, and the assurance of things to come in the new heaven and the new earth, remind me there is much to live for even in the aftermath of broken dreams. Amid the heartbreak stands the kindness of family, coworkers and even strangers that reminds me how common God’s grace is — generosities small and great that help melt the hurt and pain of the last few years.

The kindnesses include a large bouquet of white lilies from the co-workers with me when I received the worst news of my life; a cross-country move to sunny California that came at the recommendation of a former journalism adviser; the bittersweet moment dad rocked me as I wept just hours after the crash. “We tried to protect you from all this,” he said, tears falling from his face. The list goes on.

An inquiring child, I would often fold paper airplanes during class and always wondered why some that appeared to be exactly alike would dive nose-first into the wood floor while others soared brilliantly through the air. My young mind just couldn’t make sense of it.

Similarly, I don’t pretend to know why Josh died, and I no longer speculate as to why he did. I more readily pray “Come, Lord Jesus” but also find myself praying more and more that he causes lightning to strike in the same place twice — that I’ll find love a second time. Trusting in anything less is failing to acknowledge God’s mercy and power. 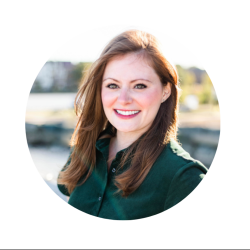 Carolyn
Carolyn is a Rhode Islander born and bred but happily resides in northern Virginia, where she works for a nonprofit civics organization. Carolyn is part of I Believe in Love because she knows love is the primary motivator behind all things good and beautiful in this world.

Written By
Carolyn
More from Carolyn
Five years ago I lost my best friend and the man I...
Read More